Post-launch cal/val activities may involve imaging well established ground targets. NISAR cal/val will partially use a Corner Reflector (CR) array as these targets are commonly used for SAR systems. As many as 20 corner reflectors located in NISAR's swath over the Oklahoma and Texas areas will be deployed for NISAR calibration. Additional corner reflectors will be deployed near Fairbanks and Delta Junction, Alaska.

Each NISAR CR measures 2.8 meters (9.2 ft) and is a triangular-trihedral reflector constructed with 0.125" Aluminum Alloy 5052 H32 perforated sheets with staggered round holes of size 0.188". They are retained to the ground with 1/16" guy-wires pulled down to the ground with turnbuckles attached to duckbill anchors buried 18" into the ground. The front and rear wooden platforms rest on 2" high cinder blocks attached with wedge anchors and held down by 14" metal stakes. 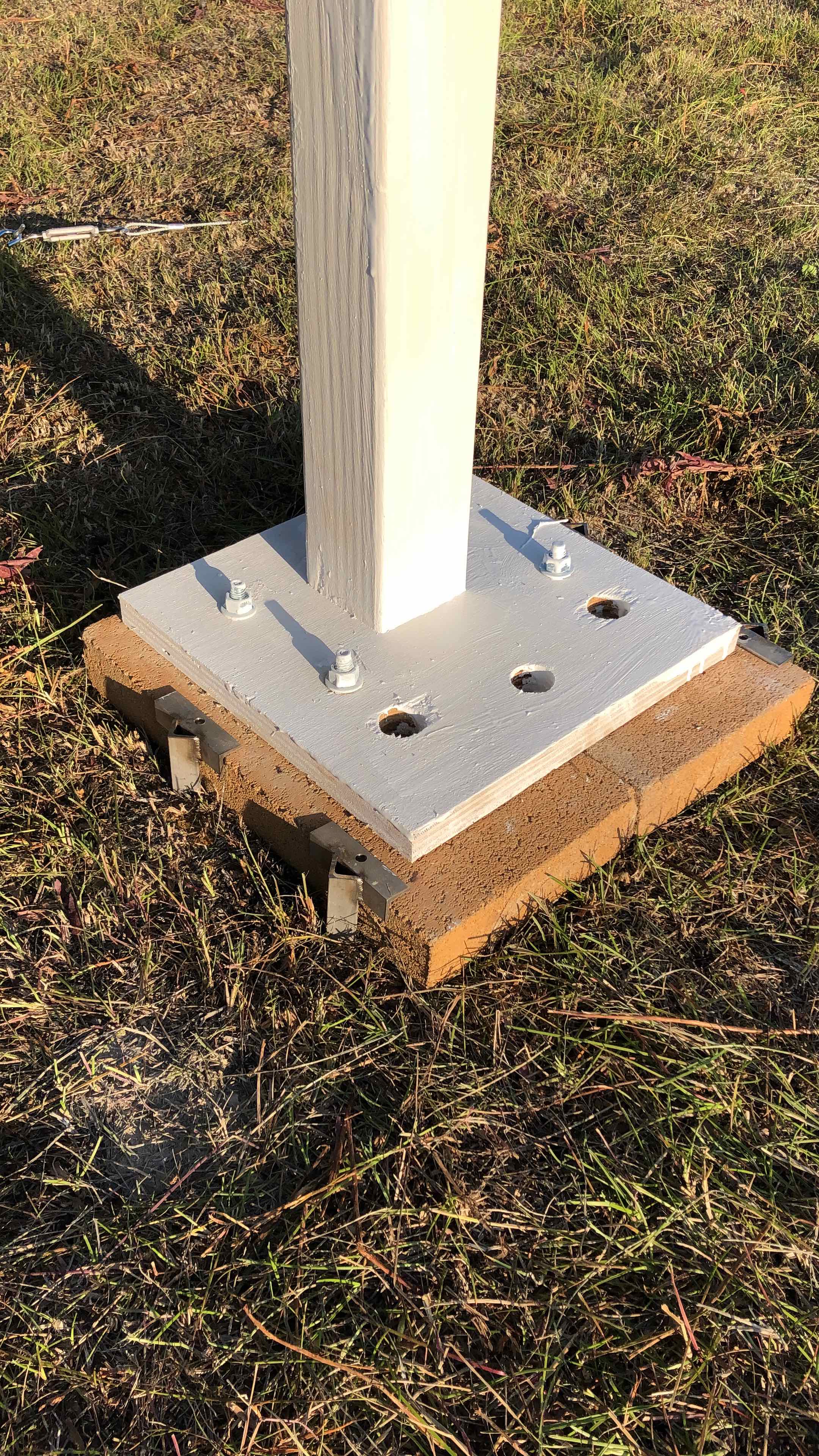 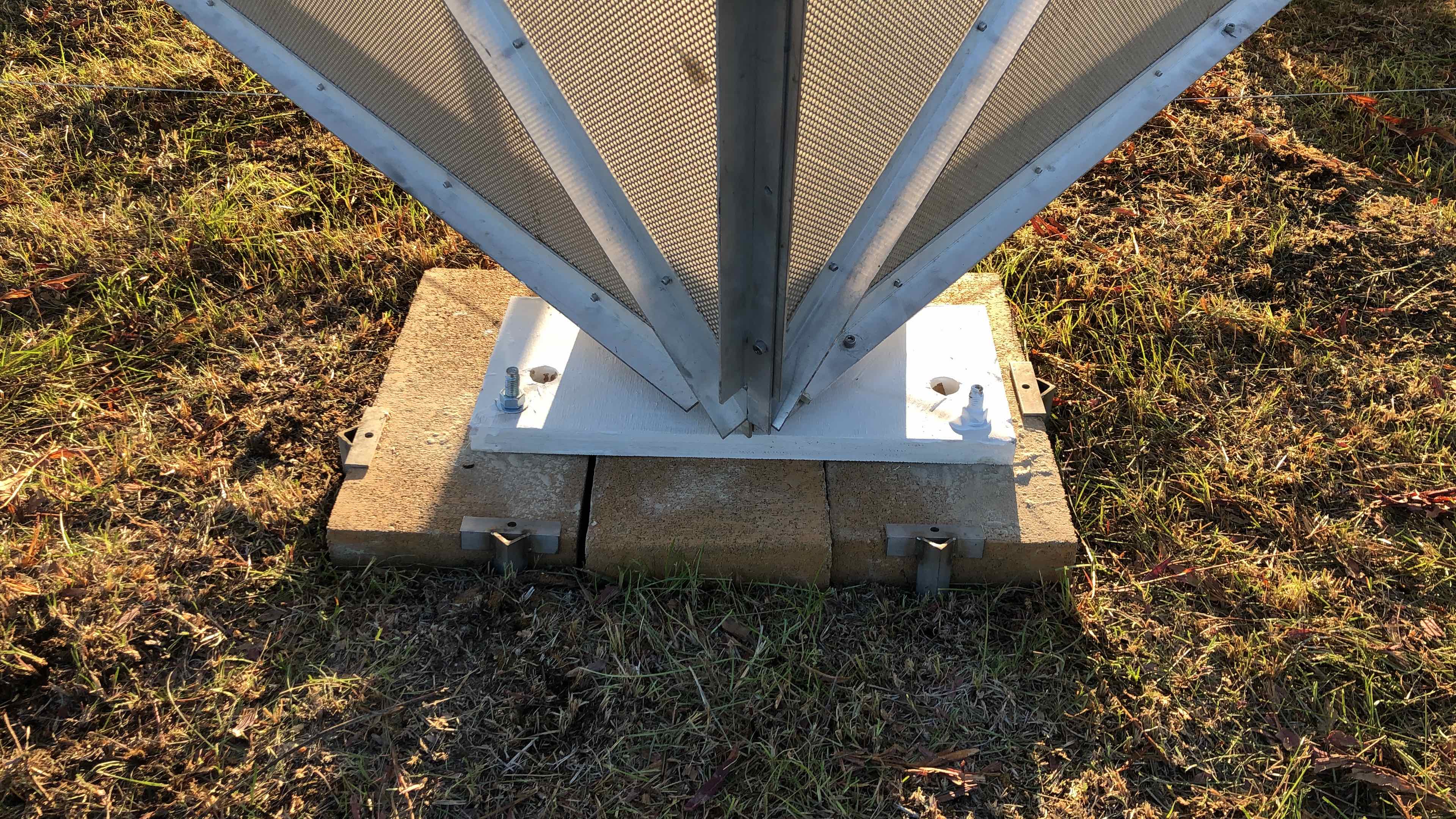 The University of Alaska at Fairbanks (UAF) CR measures 3.0 meters (9.8 ft) and is also a triangular-trihedral reflector. It is mounted on a ring stand and can be rotated to other azimuth directions. 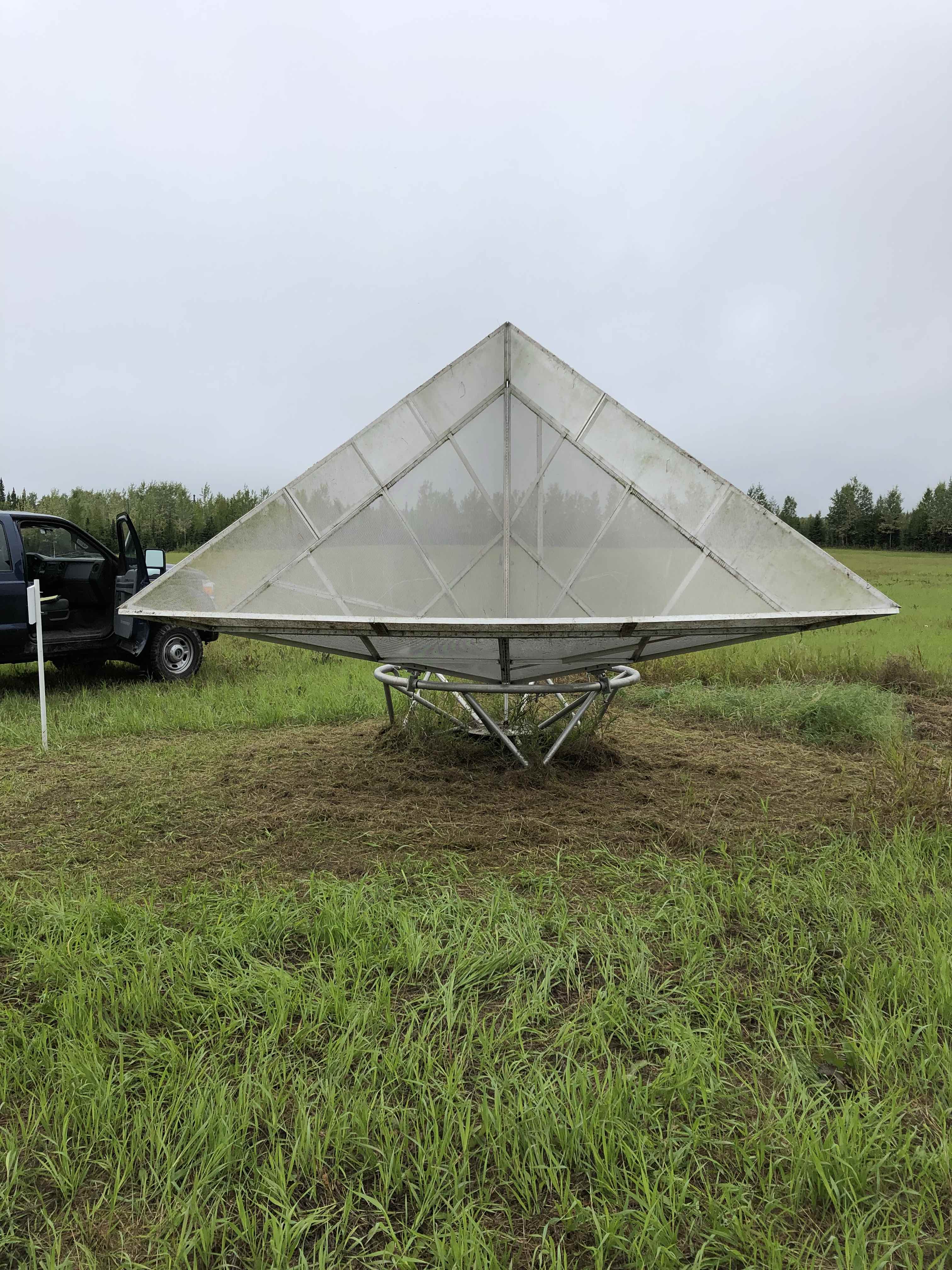 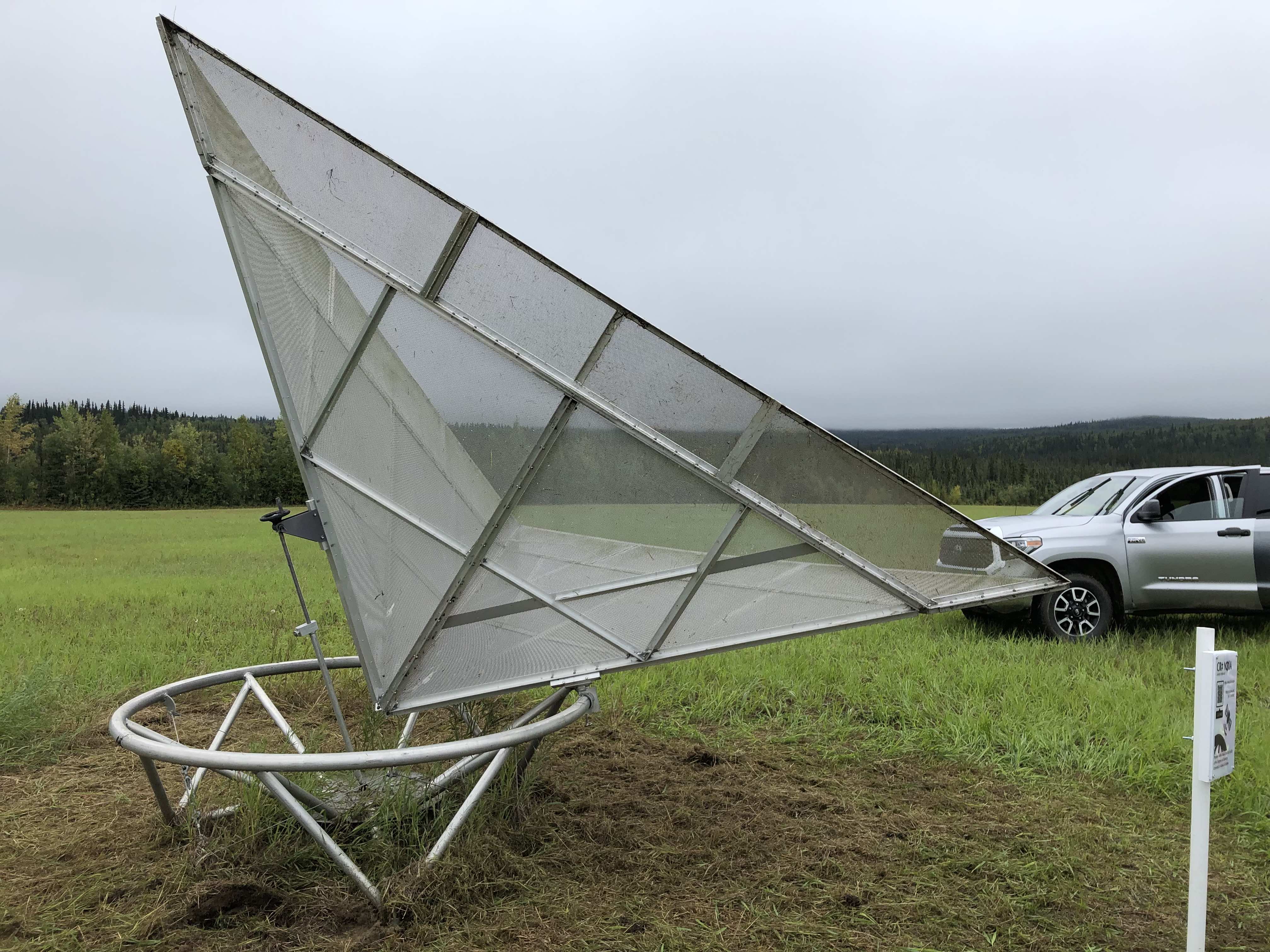 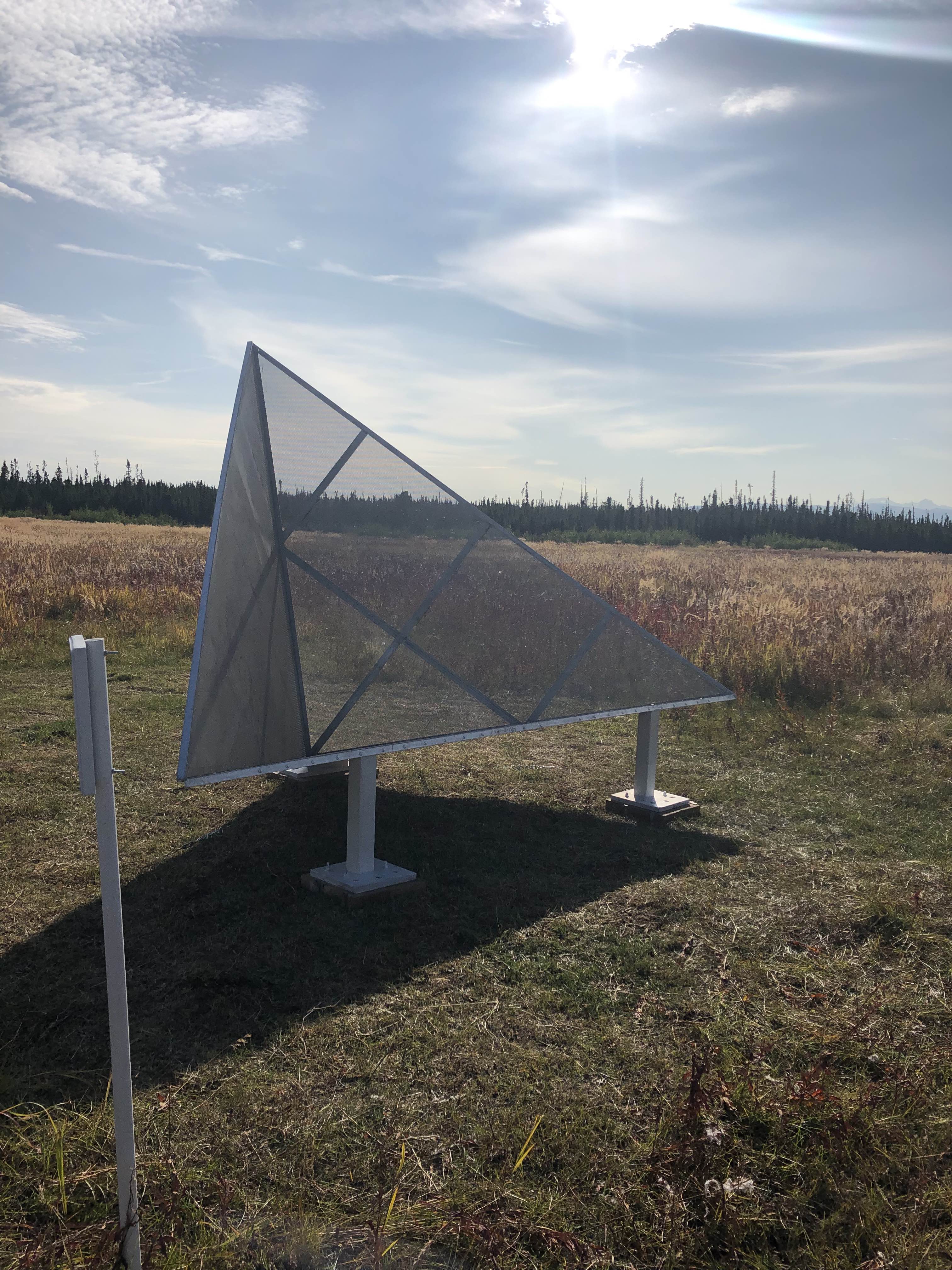 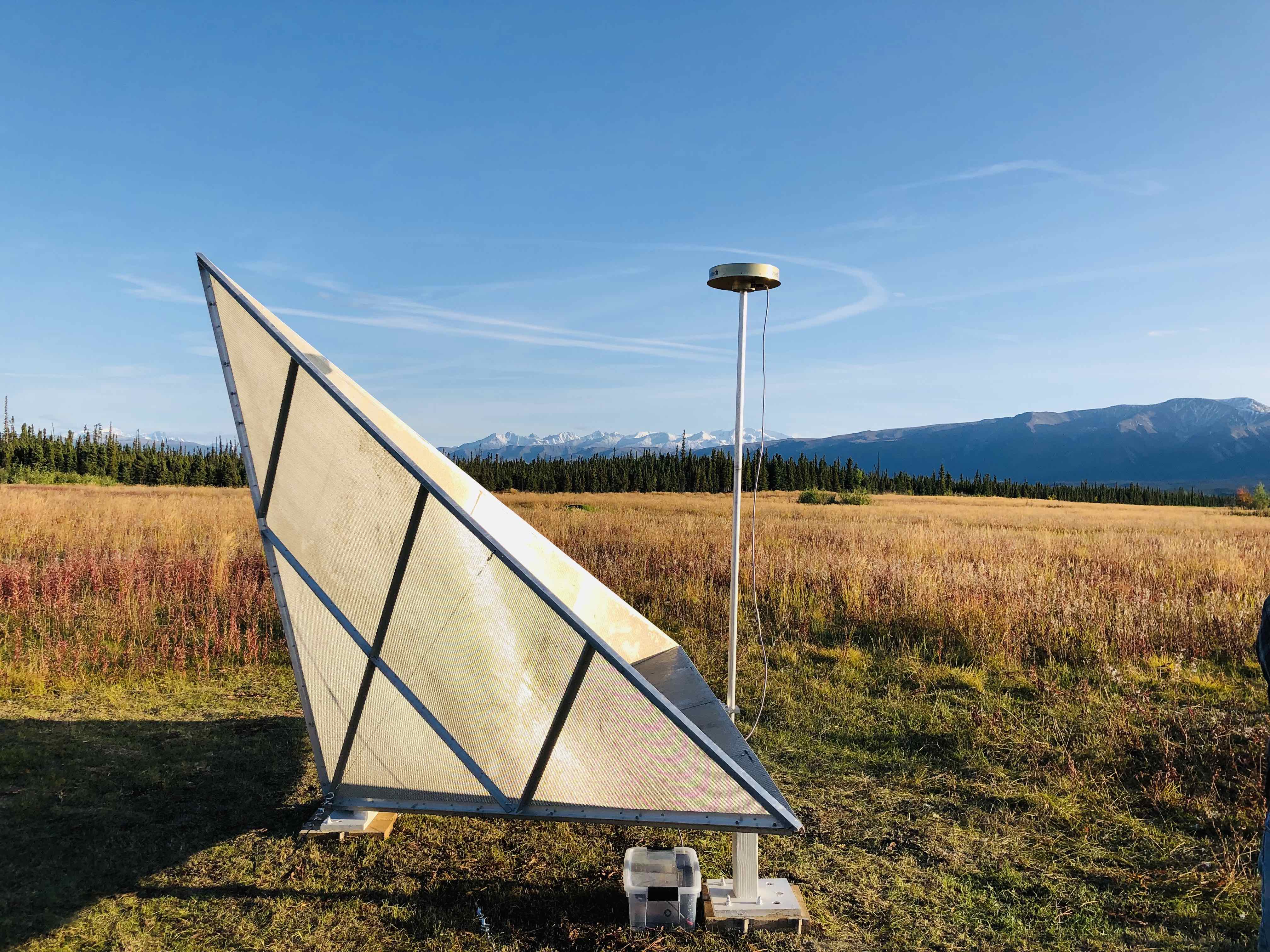 Metrology of N01A at the Panoramic Bison Range 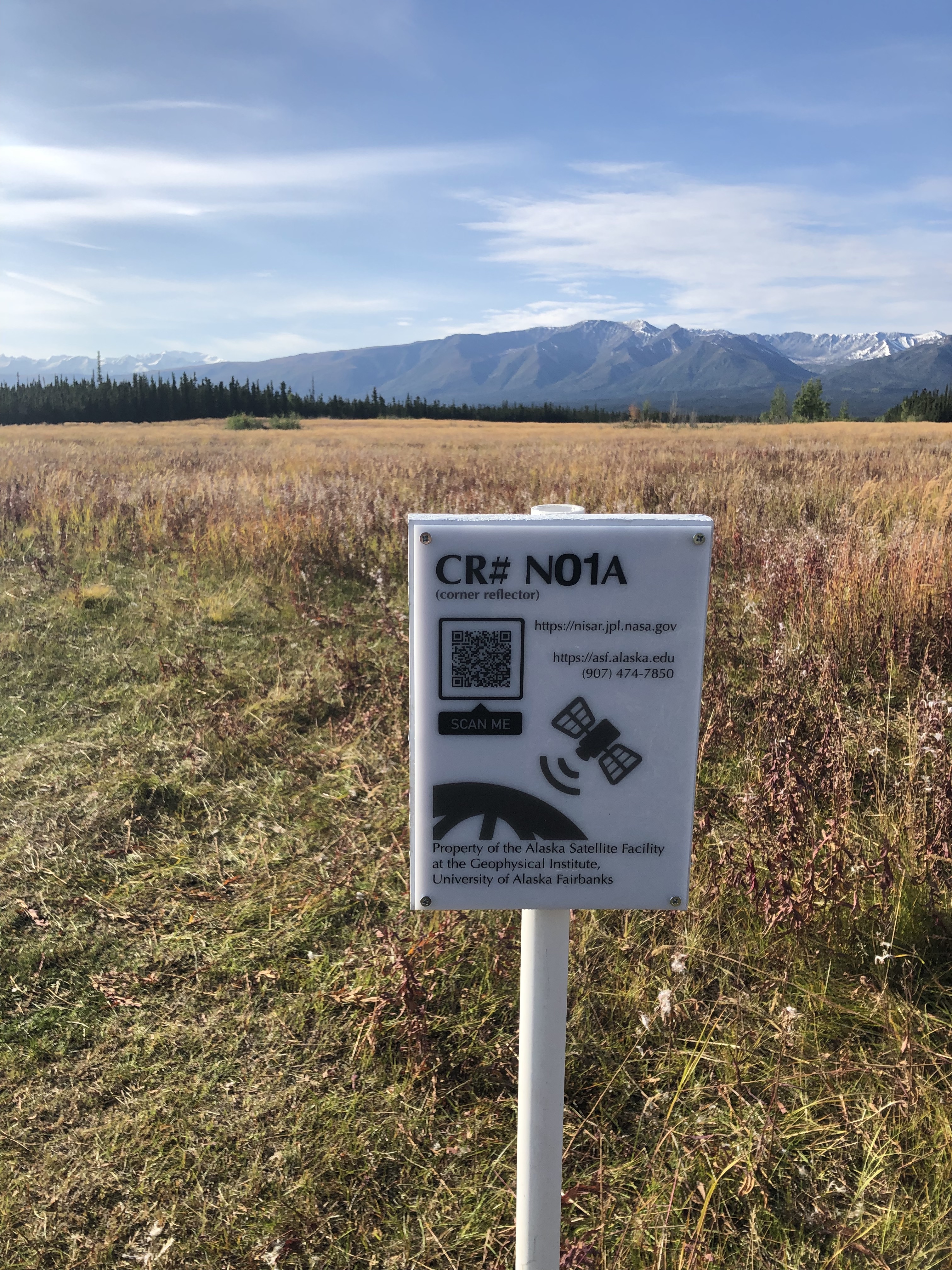 The coordinates listed here are in IGS14 Reference Frame. See a chronology of reference frames for additional information. The coordinates are expressed as WGS-84 geodetic latitude and height above the reference ellipsoid such that:

The coordinates are referenced to epoch 01-Sep-2021 and modeled with 2.2291 cms/year of plate motion with an azimuth direction of 198.19° and 0.3274 cms/year vertical. Specifically the changes in East, North, and Vertical are modeled as:

These rates are from the multi-year time series analysis of the permanent PBO site AC71 as here.

N31A
UAF's 3.0 m CR N31A was deployed 14 kms ( 9 miles ) south west of Fairbanks, Alaska. Due to time constraints, precise measurement of its position was not possible. It's horizontal position below is likely good to 10s of meters and its vertical postion is likely good to a few meters. It's azimuth heading from true north is 10.5° and is mostly East facing. There are 5 CMS (2 inches) of sag in the bottom panel that will effect radiometrics. This will be corrected for in the near future, as will the metrology of its location. 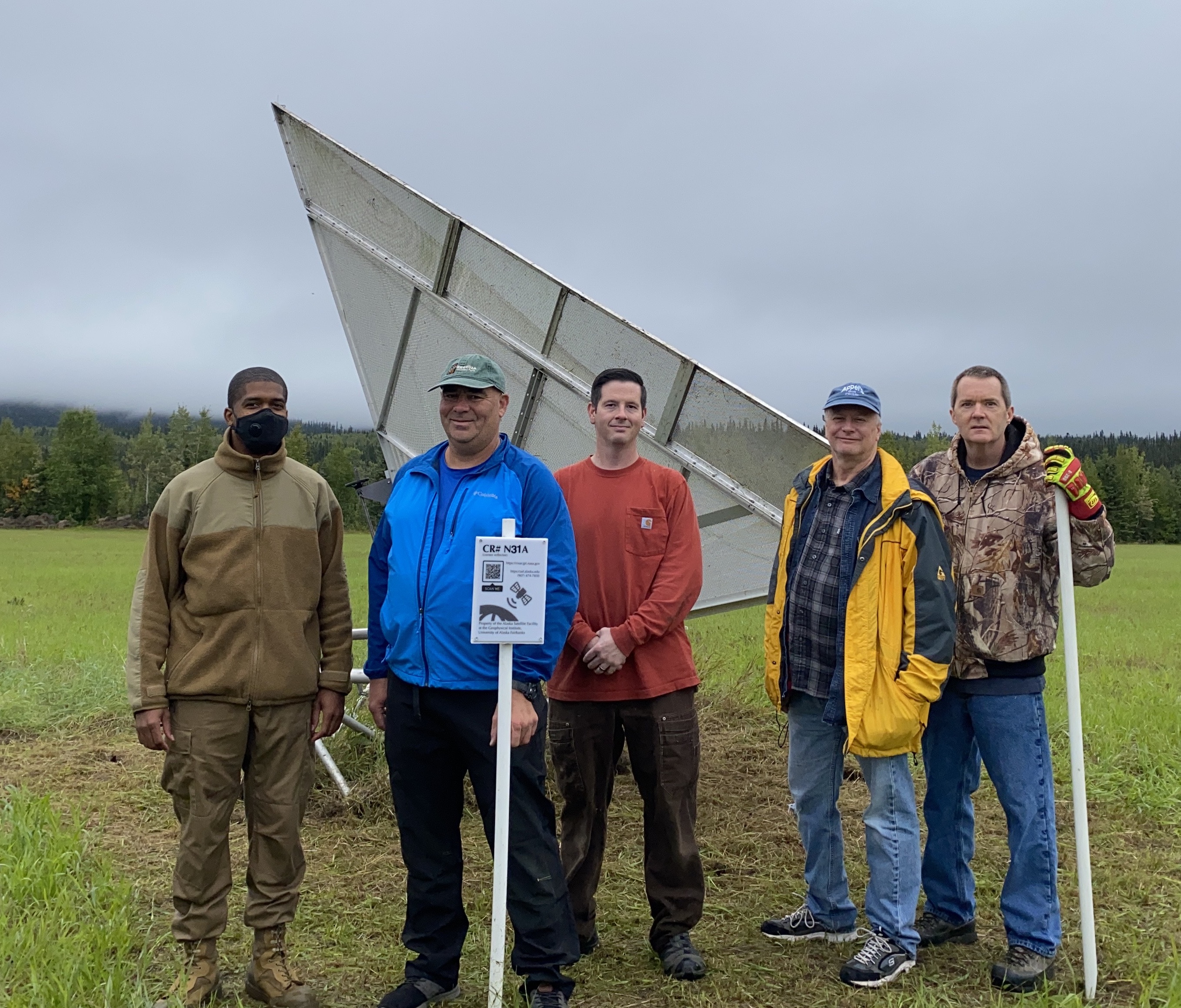 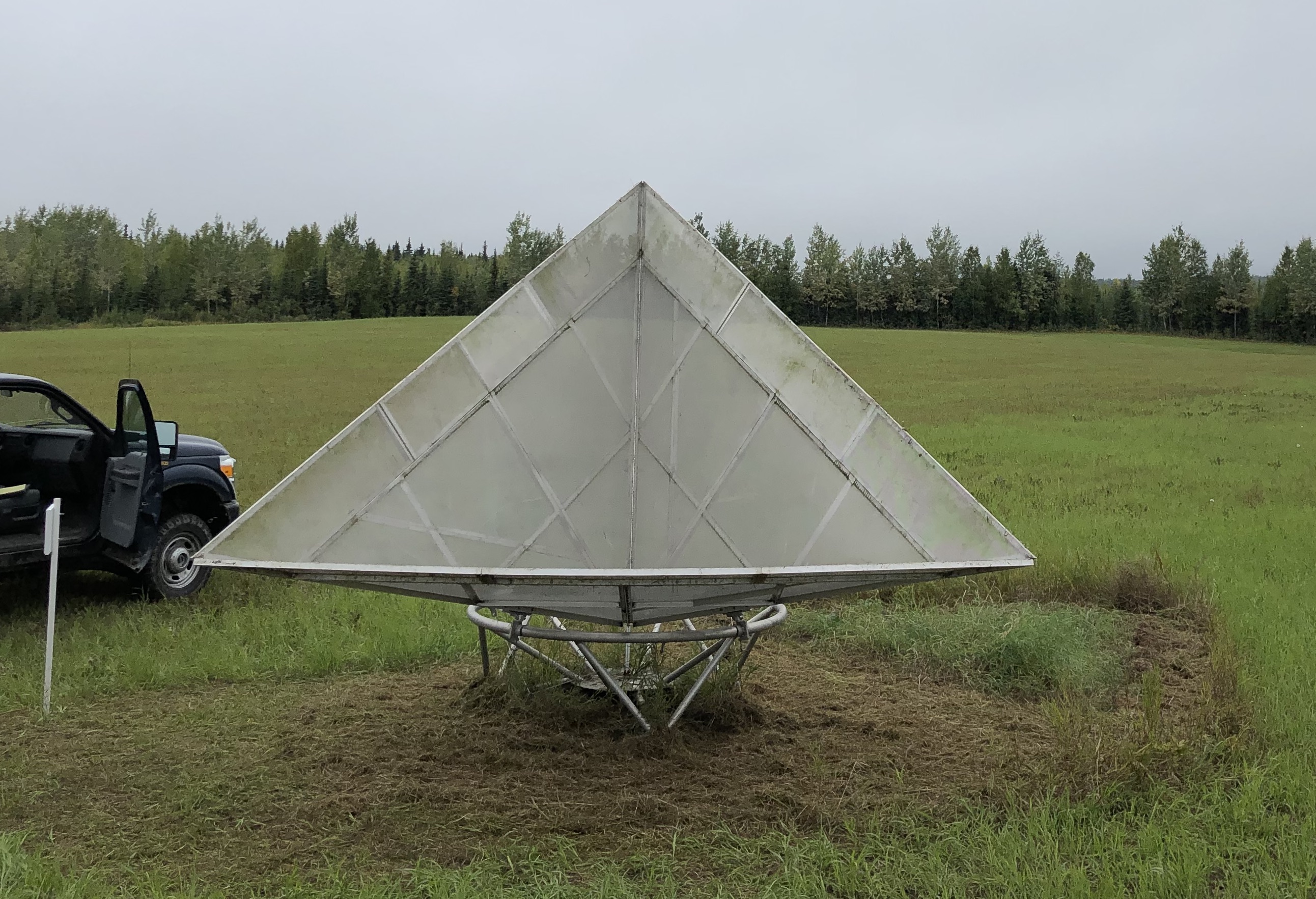 N01A
NISAR's 2.8 m CR N01A was deployed in the Panoramic Bison Range near Delta Junction, Alaska. It's azimuth heading from true north is 169.5° and is mostly West facing. Over 16 hours of GNSS data was acquired and it is believed that the accuracy of the corner vertex is better than 3 CMS. 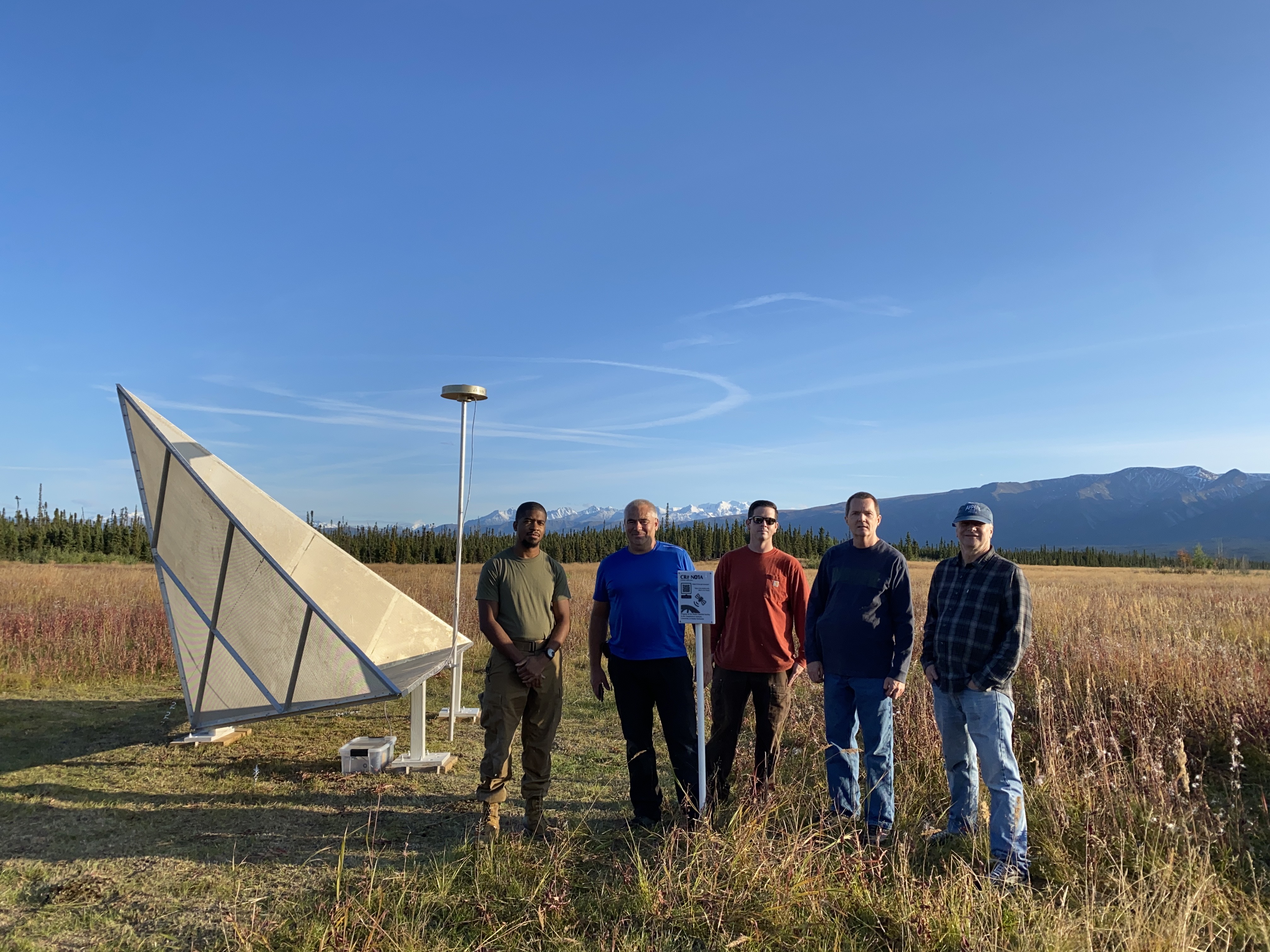 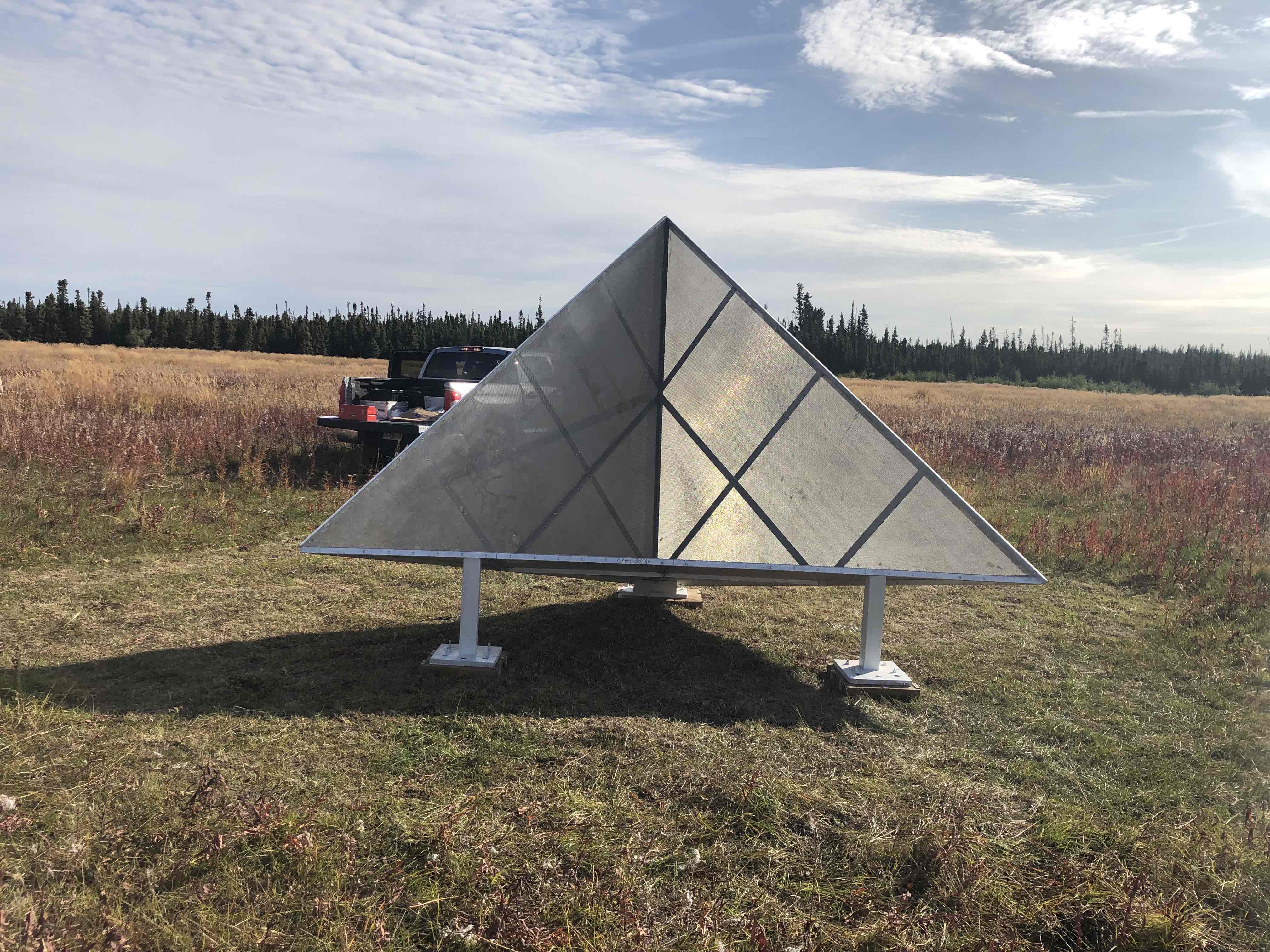 N02A
NISAR's 2.8 m CR N02A was deployed 28 kms ( 17 miles ) north east of Delta Junction, Alaska. It's azimuth heading from true north is 9.5° and is mostly East facing. Nearly 19 hours of GNSS data was acquired and it is believed that the accuracy of the corner vertex is better than 3 CMS. 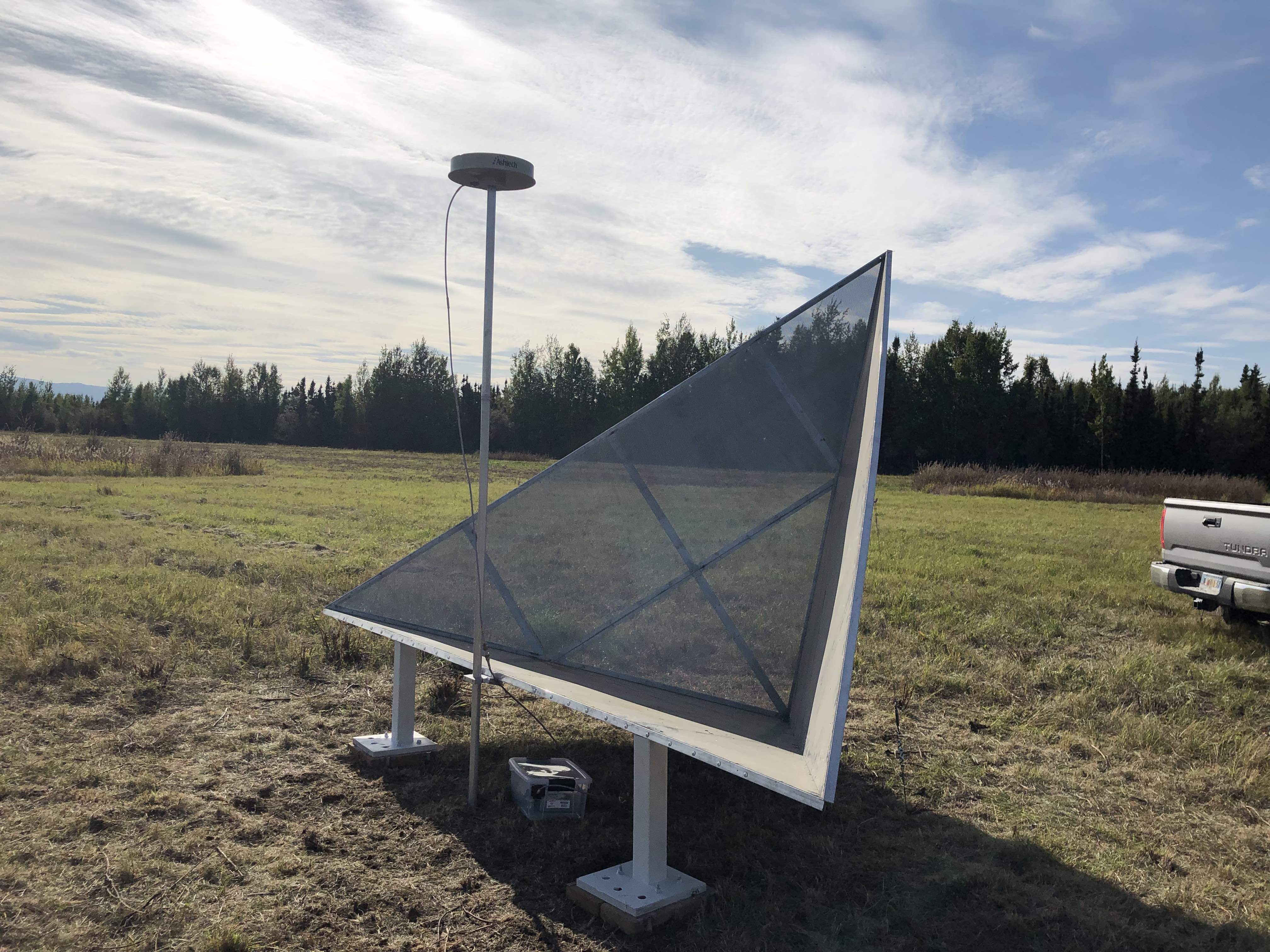 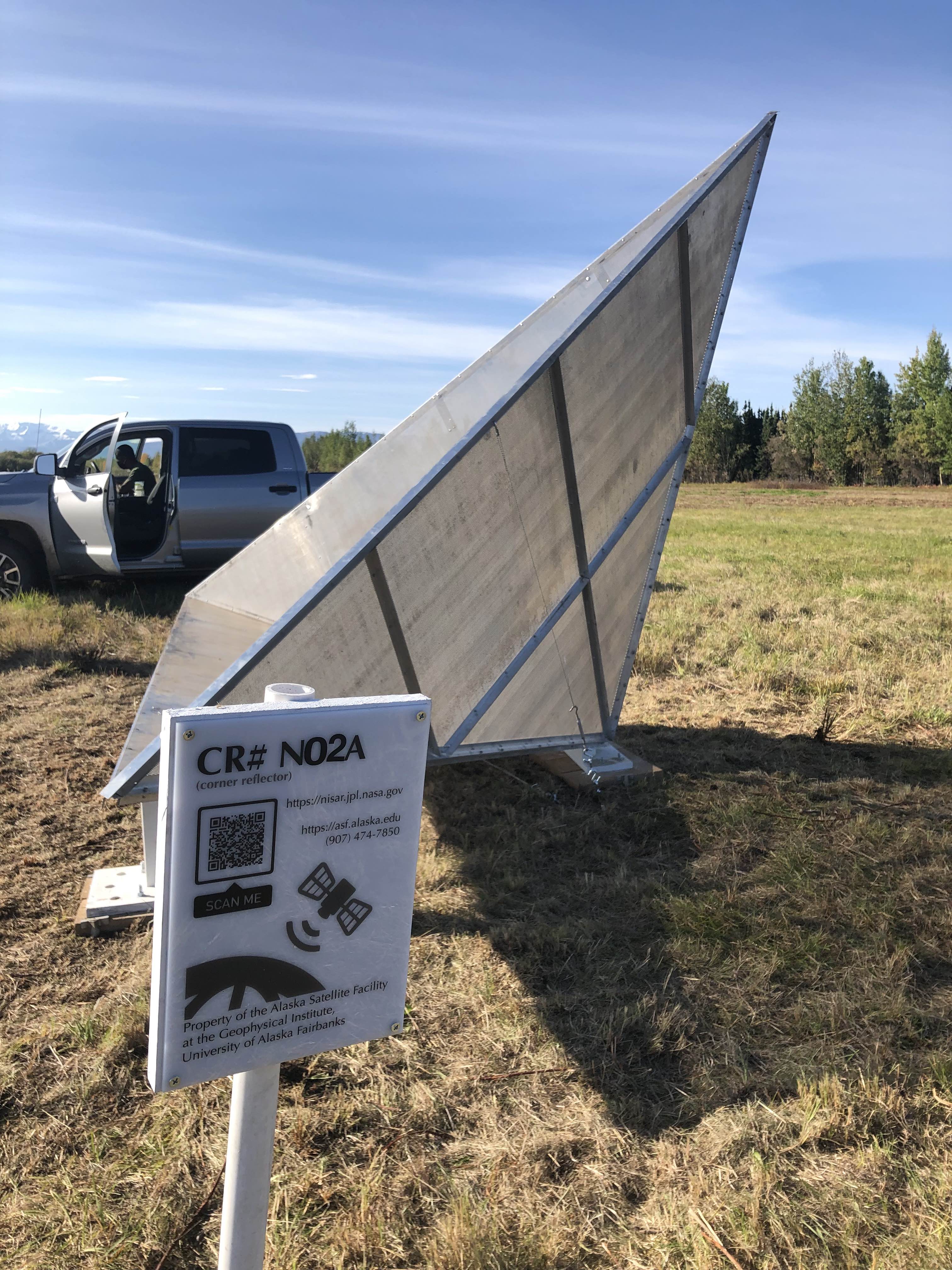 N32A
UAF's 3.0 m CR N32A was deployed 12 kms ( 8 miles ) south west of Delta Junction, Alaska at the Cold Regions Test Track. Its azimuth heading from true north is 168° and is mostly West facing. Over 20 hours of GNSS data was acquired and it is believed that the accuracy of the corner vertex is better than 3 CMS. There are a few (<2) CMS of warp in the bottom left panel near the vertex. It's unlikely this will affect radiometrics at L-band. 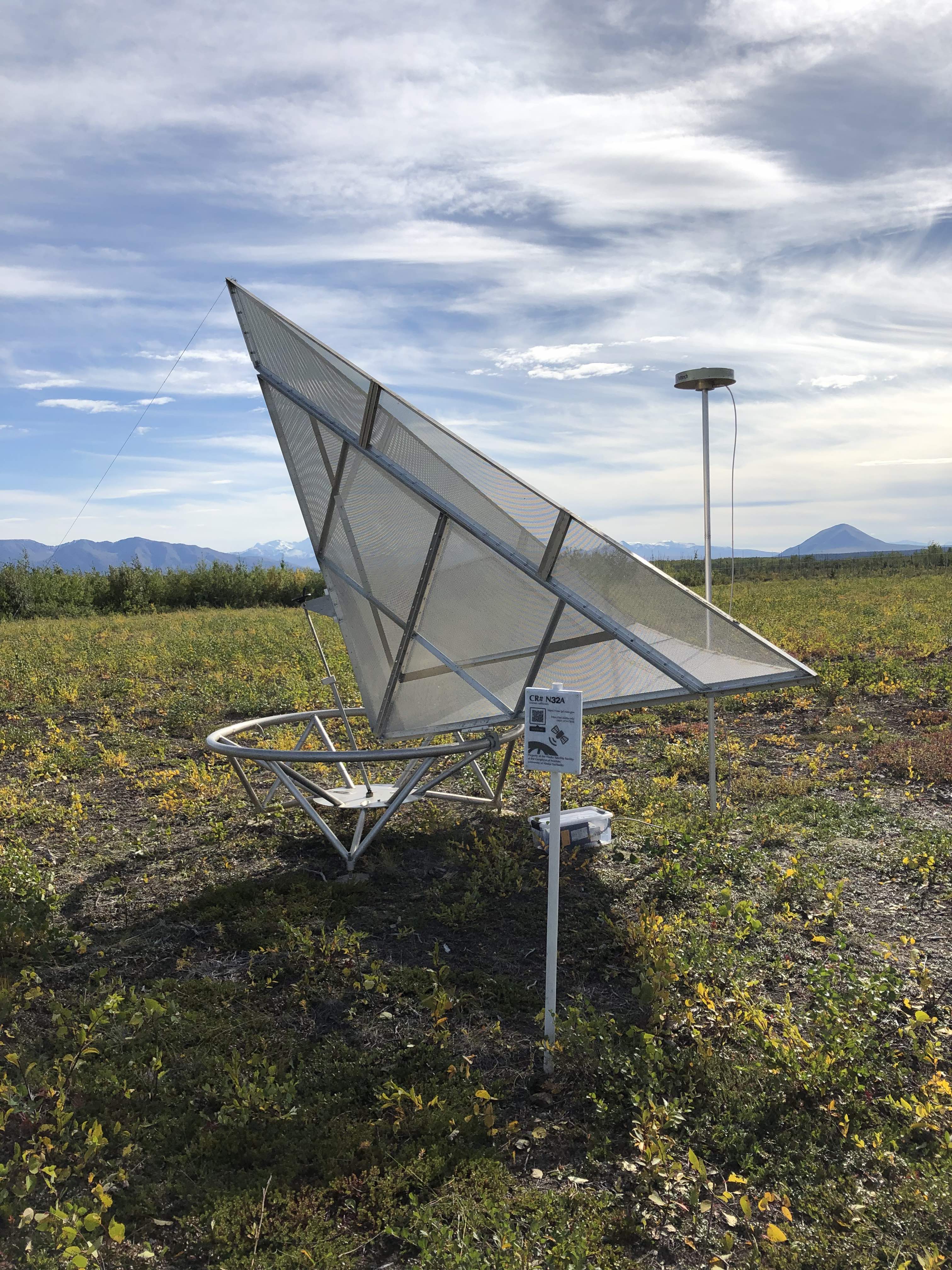 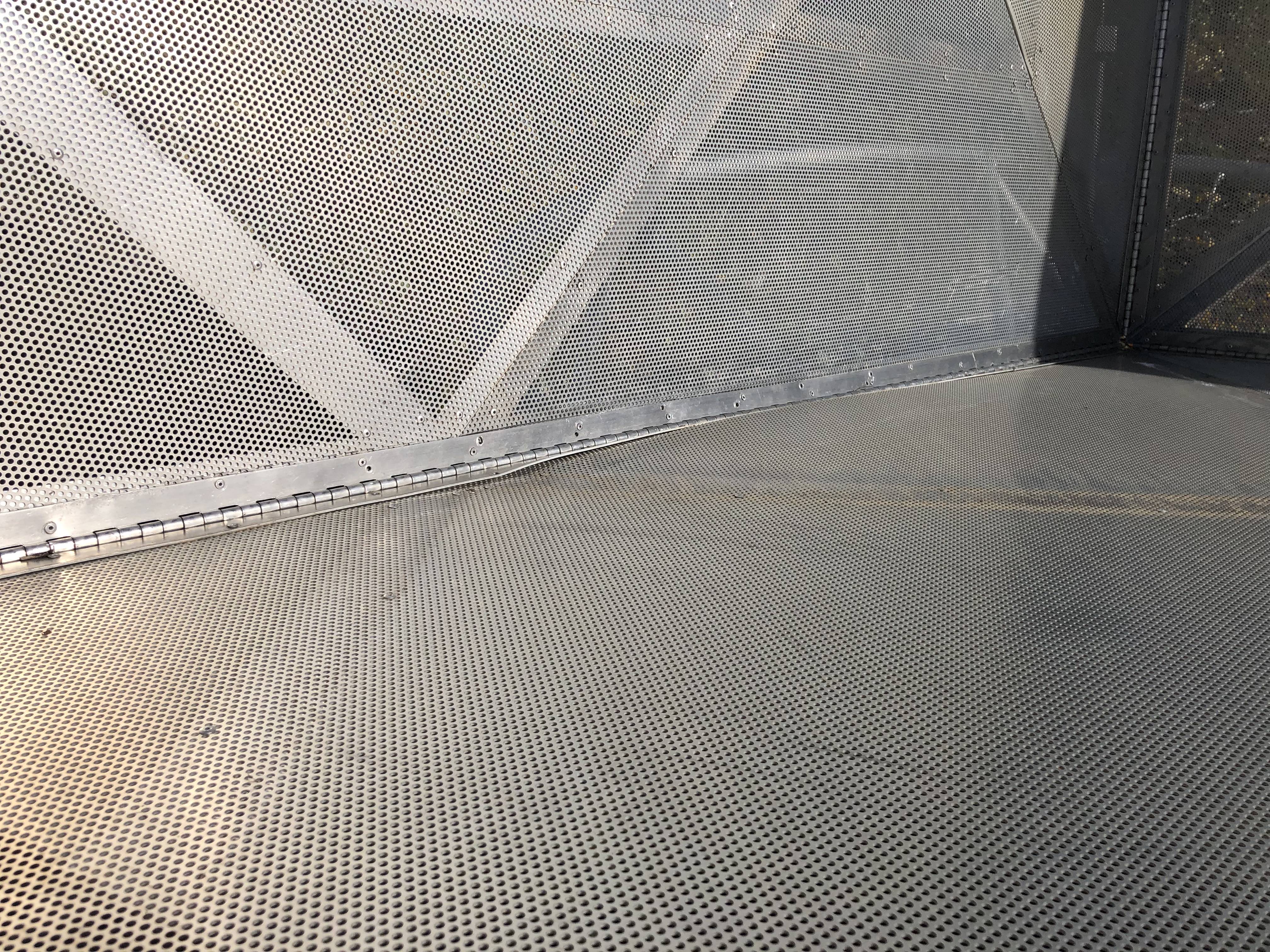 Some misalignment of the bottom panel in CR N32A, September 1, 2021

N02A
N02A was removed after the 2021-2022 winter because of significant bowing of its sides and bottom. It was re-monumented 1 m East and 35 m South of its original location. Two additional front legs were added to better secure the CR. It is now also supported by five 140 lb concrete blocks. The wooden stands are anchor bolted into the blocks and 24" stakes are also anchor bolted into the blocks to keep them aligned. N02A was also realigned for the ascending orbit of a left-looking SAR sensor. 17 hours of GNSS data was obtained and it is believed its location is good to 3 CMS. 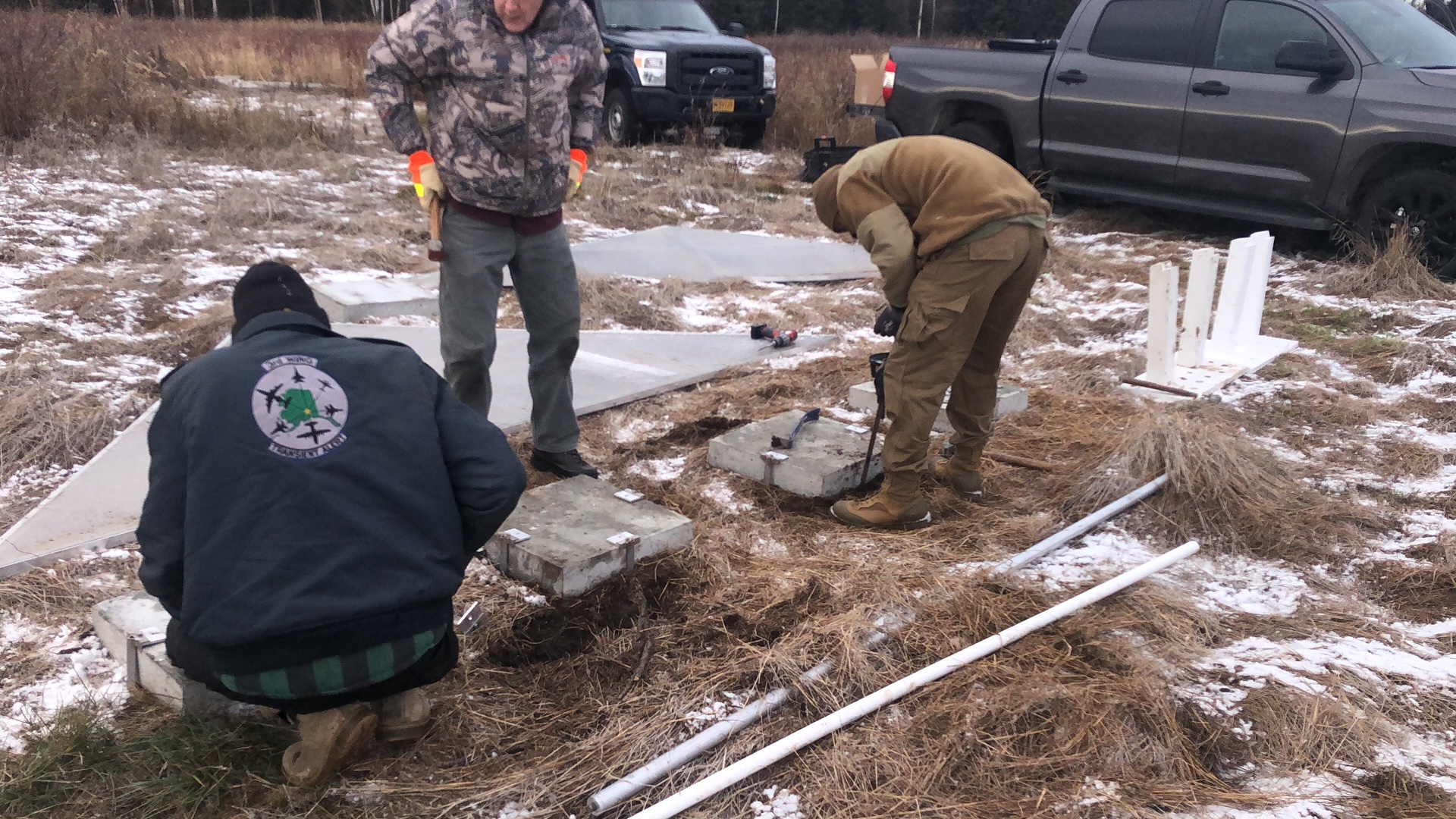 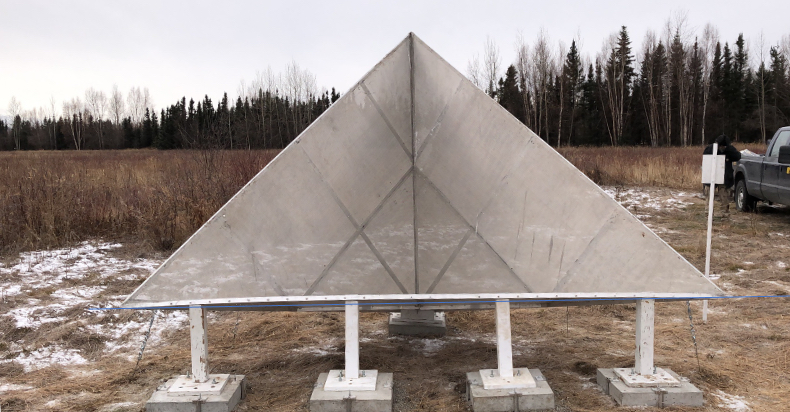 N32A
N32A overturned sometime between June and August of 2022. It was re-monumented on its ring stand and realigned for the descending orbit of a left-looking SAR sensor. At this time, no precise location of its vertex is available. The ring stand was placed approximately near its original location, as such, its location is likely good to a few meters of its true location. 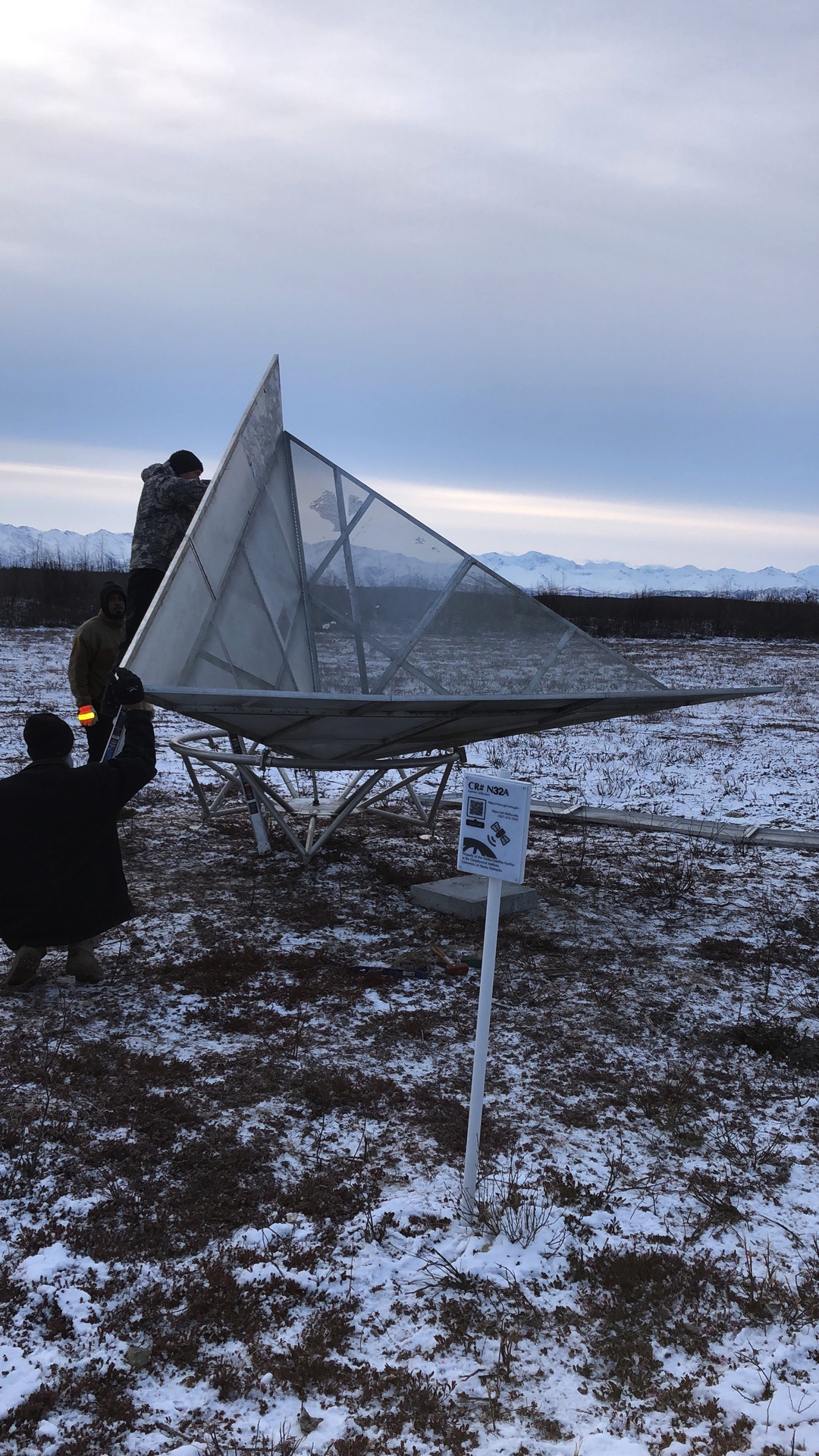 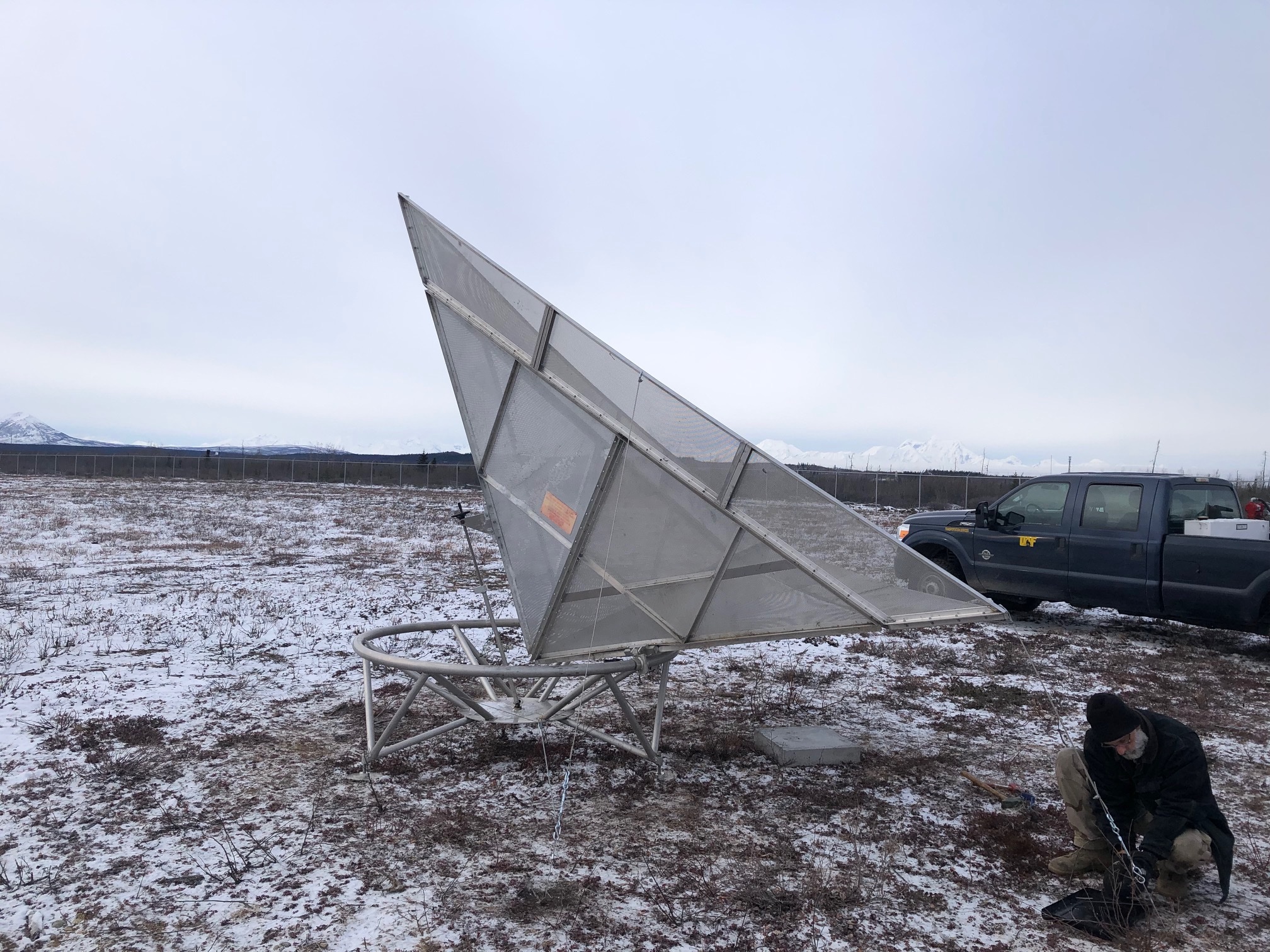 N01A
N01A was in good condition and was not moved or realigned. It's tilt had increased however from 15.64 to 17.40 degrees. It's azimuth was measured at 168.0 degrees (was 169.5 degrees). This mostly West facing 2.8 m NISAR CR will be rotated to 213 degrees azimuth and remeasured before NISAR launch. 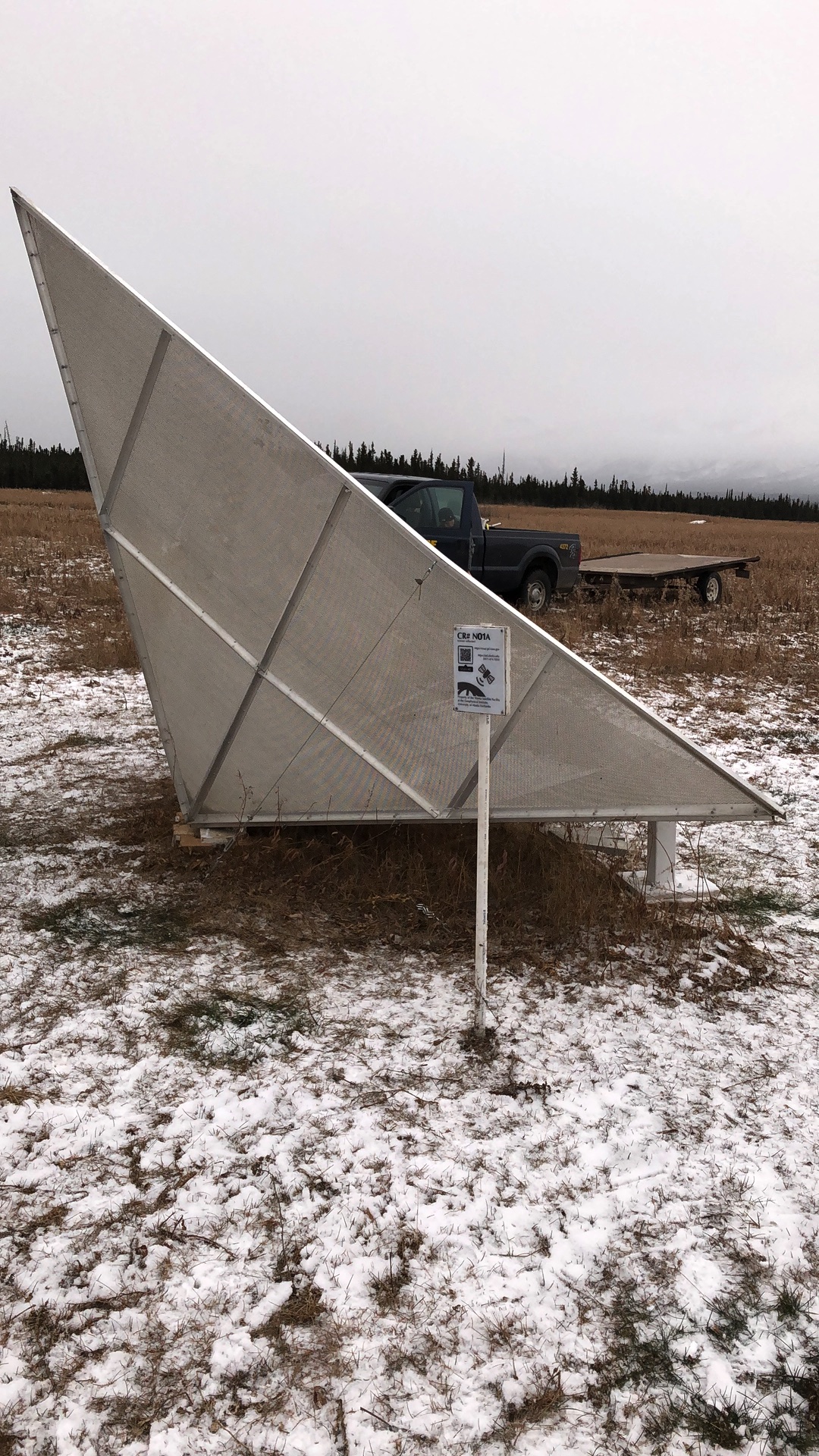 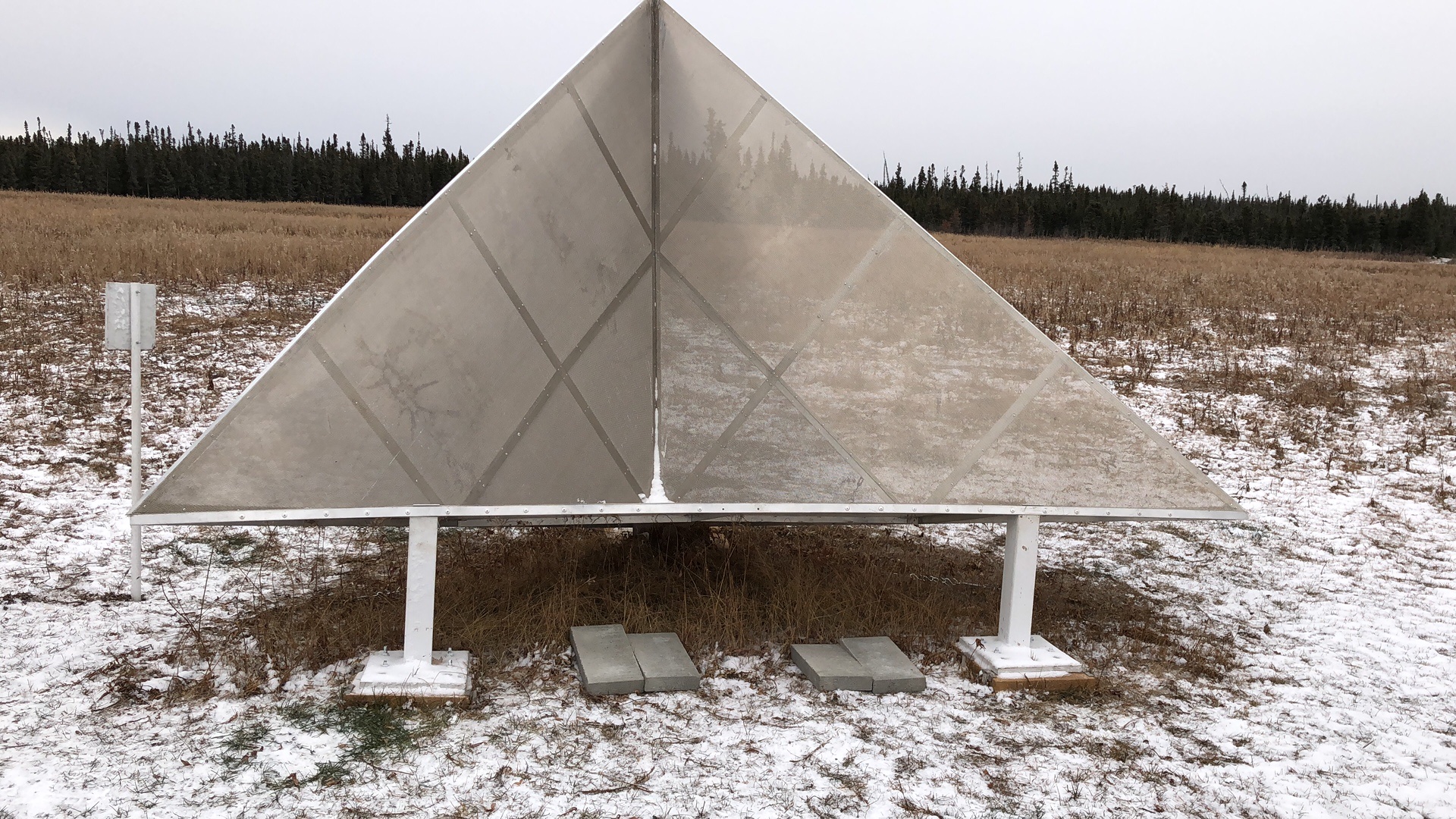 Mostly West facing CR N01A was in good condition over 1 year after installation.

N31A
N31A was measured in April, 2022. It's coordinates are now posted at this time. This mostly East facing CR will be realigned for the ascending orbit of a left-looking SAR sensor remeasured before NISAR launch.

Use the 'Get Corner Reflector Data' button to retrieve the vertices of the the NISAR corner reflectors (latitude, longitude, orientation, etc) for a particular date. Data goes back to September 01, 2021. Output is a comma-separated values (CSV) file. These are tide-free coordinates; the FES2004 Ocean Tide Model was used in the computation. The entered date applies the plate motion from nearby GPS sites AC71. The precise location of N32A has not yet been aquired.