The SWOT mission is a satellite altimeter jointly developed by NASA and CNES, the French space agency, in partnership with the Canadian Space Agency (CSA) and UK Space Agency (UKSA). The objectives of the mission are to make the first global survey of the Earth's surface water, to observe the fine details of the ocean surface topography, and to measure how terrestrial surface water bodies change over time. The SWOT mission is composed of several instruments: a dual-frequency (Ku and C-band) nadir altimeter; KaRIn, a Ka-band radar interferometer; a dual-beam water vapor radiometer (Advanced Microwave Radiometer, AMR); and, a Doppler Orbitography and Radiopositioning Integrated by Satellite (DORIS) beacon, a Global Positioning System (GPS) receiver, a Laser Retroreflector Array (LRA), star trackers, and gyros, for precision orbit and attitude determination. See here for additional information.

Post-launch cal/val activities may involve imaging well established ground targets. KaRIn cal/val will partially use a Corner Reflector (CR) array as these targets are commonly used for SAR systems. As many as 16 corner reflectors located at SWOT orbit crossover swaths over the Oklahoma and Texas areas will be deployed for KaRIn calibration. 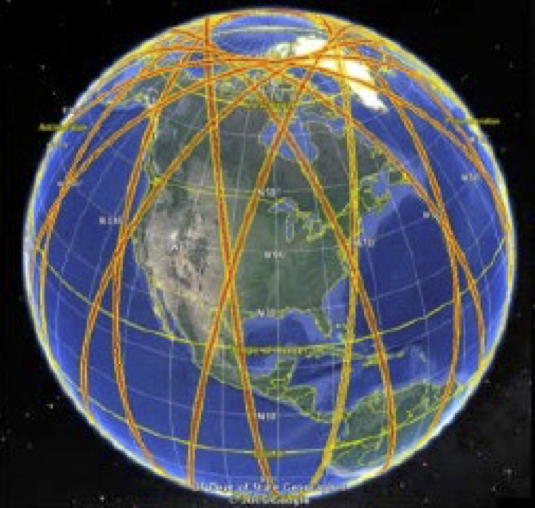 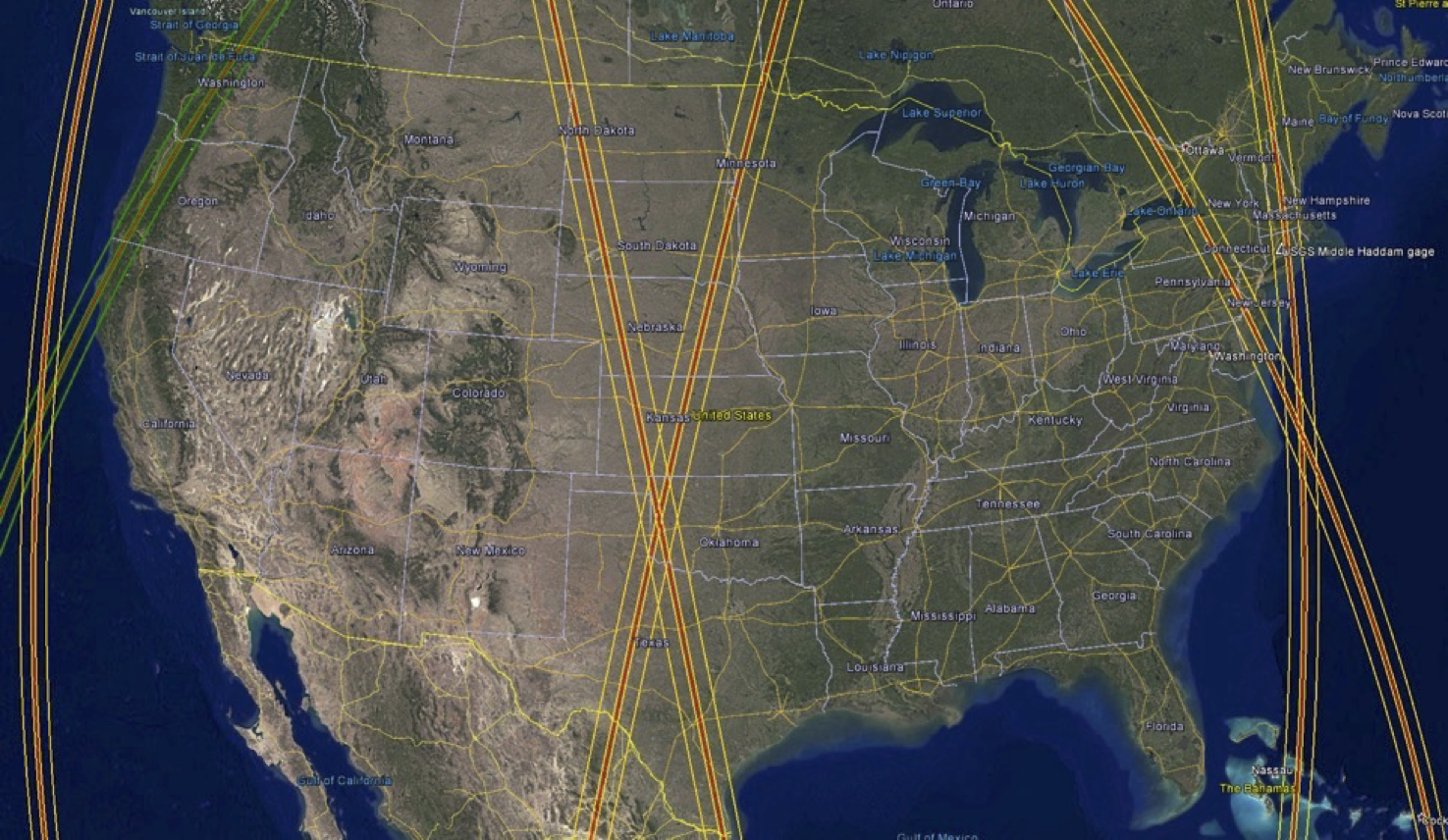 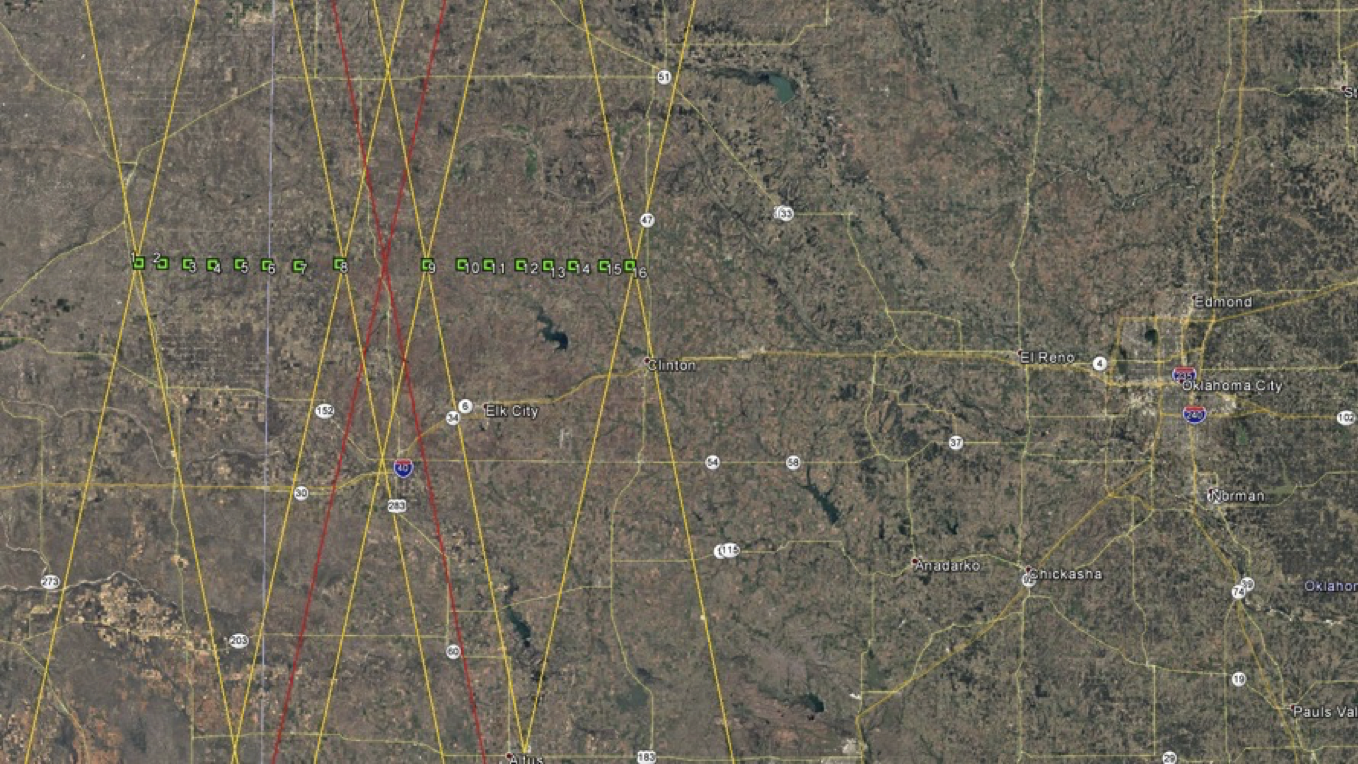 Each CR measures 0.8 meter (2.6 ft) and is a square-trihedral reflector composed of honeycomb-aluminum sheets which are precision bonded to obtain 90° orthogonality (+/- 0.1°), and then mounted in a cradle that can be tilted to optimize Radar Cross Section (RCS) return. These cradles are mounted to two shipping pallets to support the structure, and these shipping pallets are then staked at the center and retained out to the sides with AmSteel-Blue to turnbuckles and metel stakes buried up to 14" into the ground.

Trial deployment of three SWOT CRs occurred in June, 2021 on the Black-Kettle Grasslands in Oklahoma. The images below are from left to right, S02K, S03K, and S04K. These targets are all in the Western swath and all are East facing CRs. 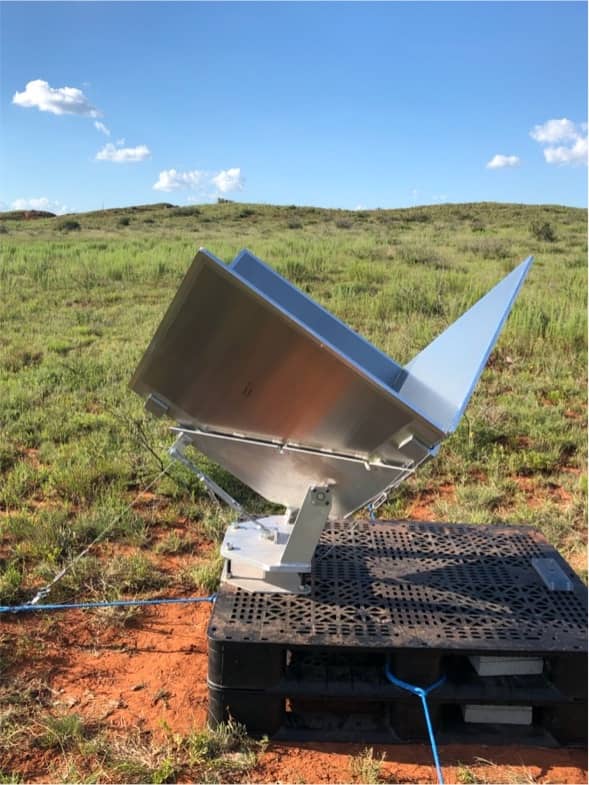 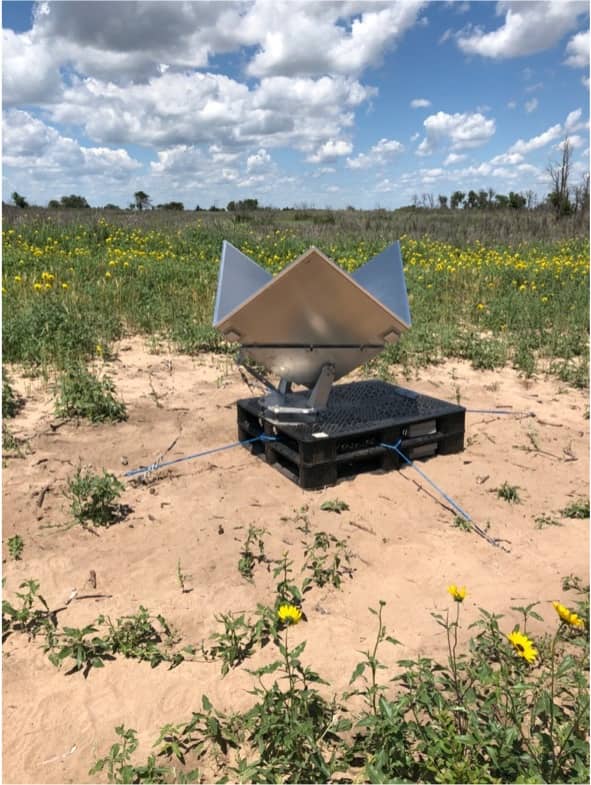 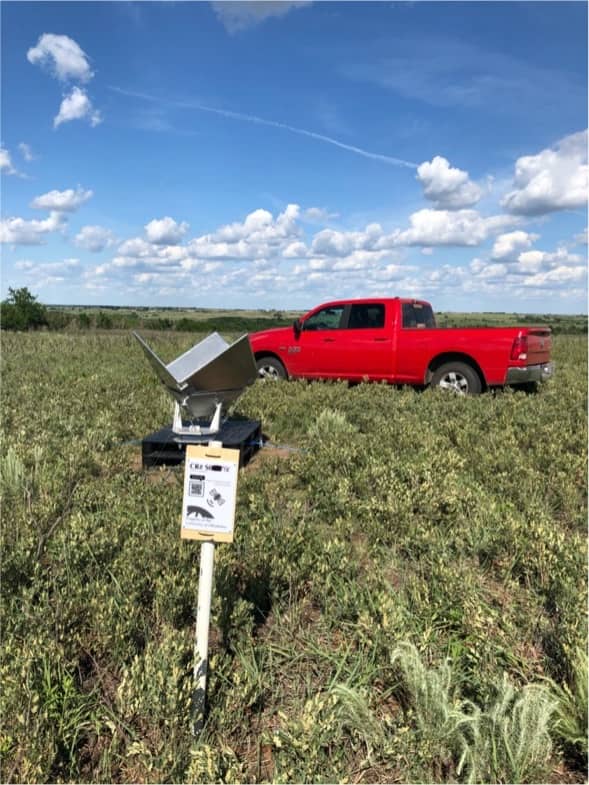 The coordinates listed here are in IGS14 Reference Frame. See a chronology of reference frames for additional information. The coordinates are expressed as WGS-84 geodetic latitude and height above the reference ellipsoid such that:

The coordinates are referenced to epoch 4-June-2021 and modeled with 1.5364 cms/year of plate motion with an azimuth direction of 254°. Specifically the changes in East, North, and Vertical are modeled as:

These rates are the averge of a multi-year time series analysis of the permanent CORS sites OKSY and OKCL. The PBO site WMOK for example here also shows simliar horizontal plate motion.

Additional GNSS data was collected at S02K, S03K, and S04K and their positions were redetermined with respect to the SWOT reference site with single-frequency GPS RTK. Vertical positions of S04K and S03K were < 1 CMS from their surveyed heights in June, 2021. S02K was known to have metrology errors from the June 4th survey. At this time we also installed S01K on December 14, 2021 at the Washita National Wildlife Refuge near Butler Oklahoma. Site location was computed relative to a new reference site we are calling SEOT with single-frequency GPS RTK. The reference site SEOT is 3.7 meters West and 2.8 meters North of S01K. Over 24 hours of GNSS data was collected for both the SEOT reference site and for S01K. It is believed that the vertical accuracy of S01K corner vertex is better than 1/2 CM 1-sigma. The image below on the right was taken March 7, 2022 and shows the square-trihedral S01K in very good condition. 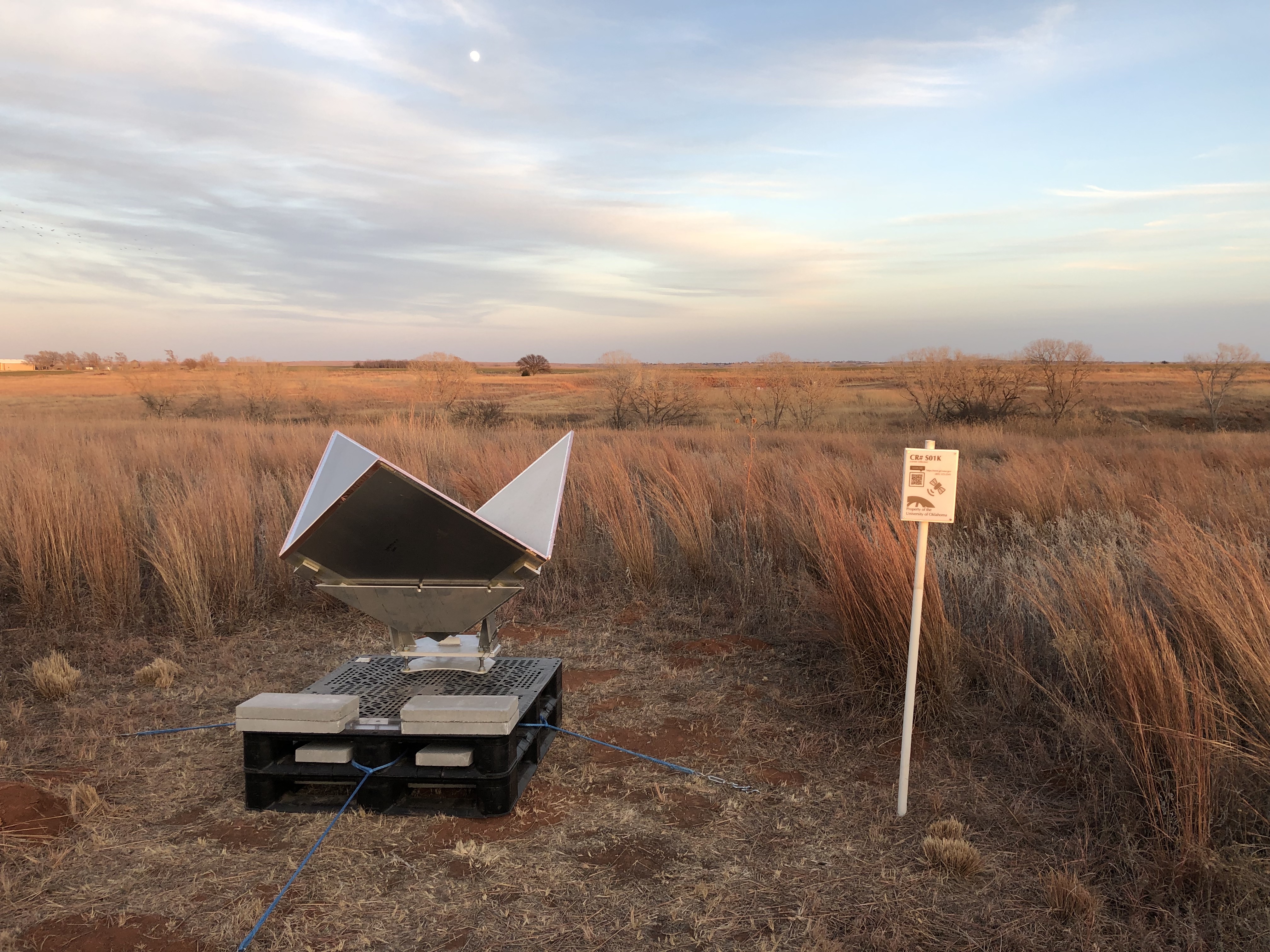 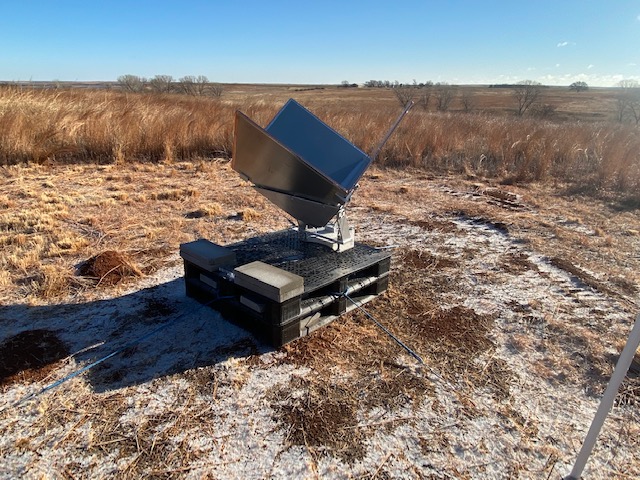 SWOT corner cubes S05K, S06K, S07K, S08K, S09K, and S10K were established in the Eastern swath. Tilts and azimuths for S02K, S03K, S04K, and S01K were also remeasured. Site location are computed relative to new reference sites RONB near S06K and FARM near S09K. It is believed that the vertical accuracy of all these new sites is better than 1/2 CM 1-sigma relative to their reference sites. The image below on the right was taken June 22, 2022 and shows the square-trihedral S05K after initial deployment. The image below on the left was taken June 23, 2022 and shows the square-trihedral S10K after its initial deployment. 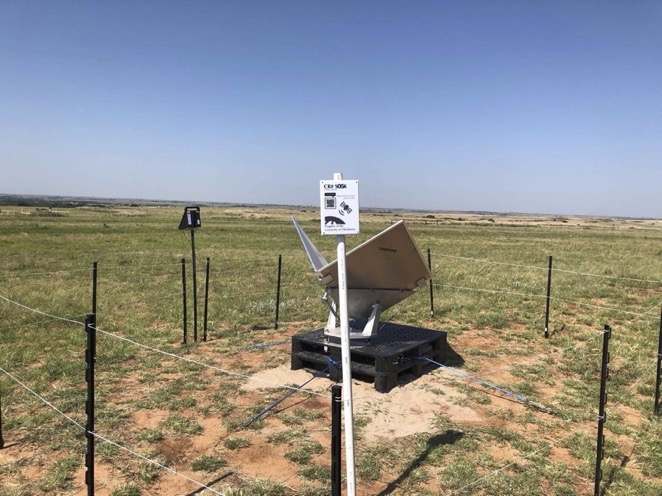 Use the 'Get Corner Reflector Data' button to retrieve the vertices of the the SWOT corner reflectors (latitude, longitude, orientation, etc) for a particular date. Data goes back to June 4, 2021. Output is a comma-separated values (CSV) file. These are tide-free coordinates; the FES2004 Ocean Tide Model was used in the computation. The entered date applies the average plate motion from nearby GNSS sites OKSY and OKCL.