UAVSAR-Ka is a state-of-the-art Ka-band airborne single-pass interferometric SAR designed to map land surface topography. It is part of the UAVSAR instrument suite.

UAVSAR-Ka can be used for a variety of science applications. If you are interested in requesting data, please look into submitting a flight request. 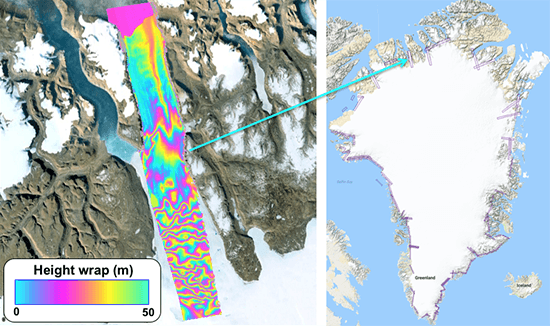 UAVSAR-Ka has collected data over glaciers in Alaska and Greenland, enabling scientists to measure glacier elevations and velocities.

When compared to lidar data, UAVSAR-Ka's elevation measurements were shown to meet its height precision requirements. 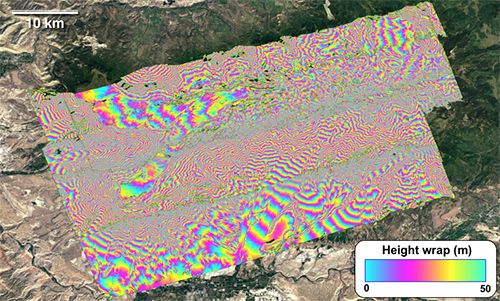 Preliminary topographic mosaic of the SnowEx experiment over Grand Mesa,
Colorado. Data was acquired in February 2017.

UAVSAR-Ka participated in the SnowEx airborne campaign, collecting snow topography data before and after snowfall. 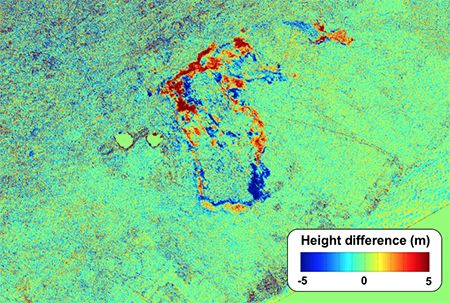 Observing topography change due to lava flows from volcano eruptions 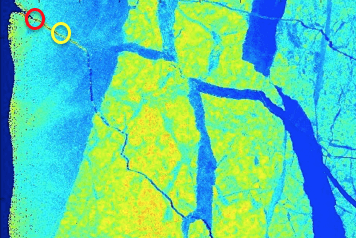 Example of open leads in the height image used to
measure ice thickness.

UAVSAR-Ka has demonstrated the ability to measure sea ice thickness, the difference between the surface height of the sea ice and water in open leads (narrow, linear cracks in the ice).

UAVSAR-Ka DEM over a flooded area of California's Central Valley.

Scientists are investigating the use of UAVSAR-Ka to improve flood forecasting, since its high topographic accuracy and resolution would better drive the models. Flood signatures have been observed in data acquired in the Central Valley and North Dakota.

These applications have yet to be demonstrated.

X-band has shown the ability to measure canopy height and even structure. UAVSAR-Ka could possibly work comparably to X-band, opening the possibility of more compact radar/lidar implementations. 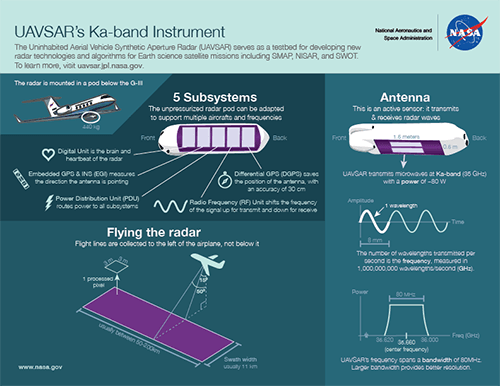 Science demonstration flights began in 2013 over alpine glaciers and sea ice in Alaska, and floodplain in California. UAVSAR-Ka's applications have since expanded to other areas such as snow accumulation and volcano dynamics.